Waking up in the little wooden cabins in Las Terrazas felt so natural that Eric had to wake Andrea and I up because we both were out! We had an 8:30am taxi driver picking us up to take us to Soroa followed by Viñales, but once again we were late (Boricua by blood). In Soroa, we stopped at El Salto, a beautiful waterfall of about 40ft. After a short hike and quick dip, we were on our way to Viñales.

The Pinar del Rio province (“pine forest of the river”), located in the southwest corner of the Cuba, is where the bulk of the island’s agriculture takes place. Infinite fields of corn, tobacco and sugar cane are ubiquitous throughout this region, in addition to pesticide-free organic food.

Cuba’s well known embargo has forced Cubans to maintain old agricultural traditions. Absolutely no machinery, pesticides or herbicides are used. Instead, bulls are domesticated to plow the soil and the remaining labor is done by hand, “a machete limpio.” It is then no surprise that the main sources of income in Pinar del Rio are agriculture and tourism, with the latter being on the rise due to word getting around on the worldwide web (yes, Cubans are learning about the internet now).

Valle de Viñales, a small town within Pinar del Río, is characterized by great tobacco plantations and its beautiful landscape, composed of distinct “mogotes” that decorate the valley. “Mogotes” are stand-alone hills that have formed due to the erosion of limestone caves by underground rivers. They are unique to this region and can only be found in Cuba.

While touring through the ‘Valle del Silencio’ on horseback, I couldn’t help but notice that corn was everywhere and I had to ask, what for? It felt as though I was in Wisconsin instead of Cuba (yes, there were that many plantations)! The answer was very simple, corn is the rotation crop for tobacco. Corn essentially contains zero nutritional value and therefore doesn’t deplete the soil from its nutrients, but when it dies its organic matter is used as compost for the soil. After this tobacco season is ready to begin.

Our first dinner in Viñales was at “La finca agroecológica, El Paraíso” a farm-to-table restaurant run by a family of five. The food was amazing but the portions served where huge! Andrea and I even came back the next day for dinner and were served the same amount of food as when there were five of us eating the day before. Given the fact that so much food was still on the plates, I had to ask our waiter what they did with the food that was left over. His answer was “We eat it, and what is left we give it to the animals or use as compost.” His answer shocked me because in the US eating leftovers from diners at a restaurant is unthinkable, and here we are in Cuba where people feed themselves by eating our leftovers. This not only happened at El Paraíso but also in every casa particular we stayed in. Food is scarce in Cuba and I did not realize the extent of it until this moment. Every month Cubans get the following rations from the government: 5lbs of rice, 5lbs of beans and 1lb of sugar. Other than this, Cubans need to work to pay for everything else to survive. But there is barely enough work to do that actually pays the minimum amount they need, so things can get pretty hard. 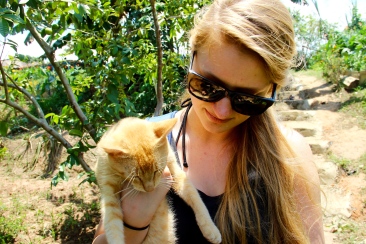